Looking to dive down under? Then read this guide to Australian scuba diving holidays to find out what it’s all about. We also include the 21 best dive sites in Australia so you know where to visit on your trip.

Australia is renowned for its diverse flora and fauna and the waters that surround it are no exception. From whales shark and manta rays to turtles and seahorses the waters are full of variety.

Many folk assume diving in Australia is all about the Great Barrier Reef. Whilst it’s obviously a huge draw, there are over 37,000 miles of coastline with many great dive sites all around the country.

From the cooler southern waters to the tropical north Australia is large enough to offer many different types of marine ecosystems. There is plenty of variety between the east and west coasts too. There is obviously local seasonality with Australian scuba diving holidays. Some spots are better at different times of the year and you are more likely to see specific creatures in certain seasons.

However, on the whole Australia is a year round divers paradise. There is always somewhere good!

Let’s imagine we’re on a bespoke Australian scuba tour. So, what would the must see spots be? There are LOTS, so it’s impossible to cover them all…. But here are my top 21 Aussie dive sites (or areas!) – so visit as many as you can! 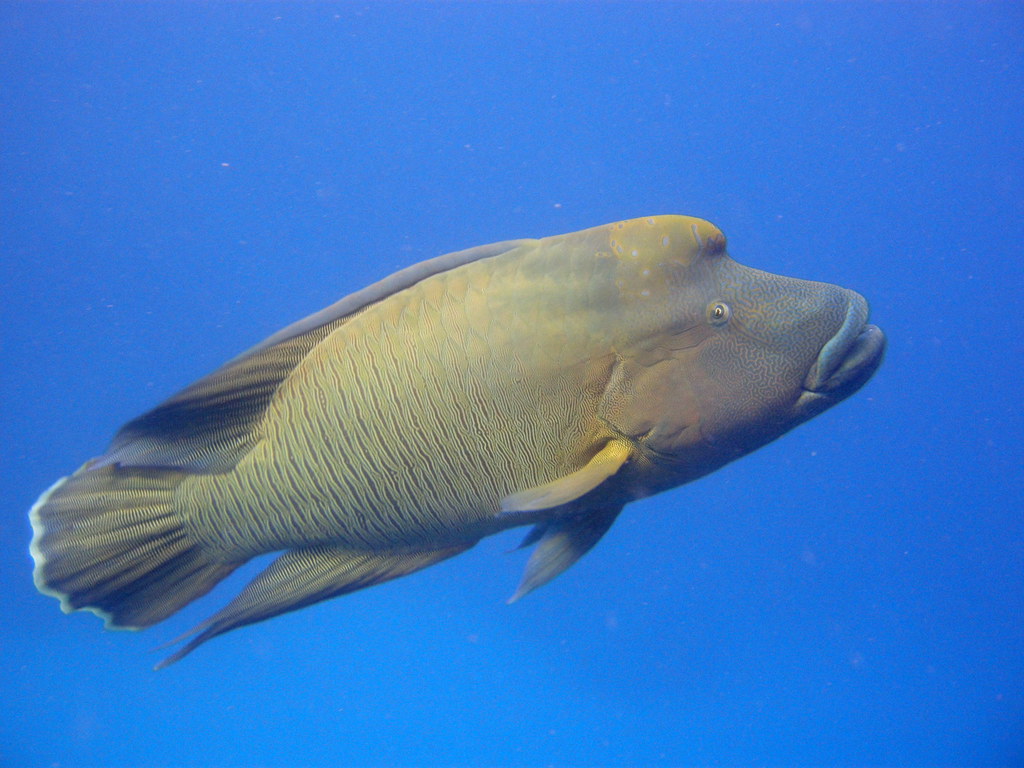 I was unsure where to begin, so I am treating Australia like a clock and will be starting at 12 in Darwin. From there I will work clockwise around Australia – what a road trip that would be!

Darwin is not just the main city in the Northern Territory but also home to most of its recognised diving. There are around 10 well documented sites many of which are wreck dives including some from WWII.

The Vernon Islands are included in this guide to Australian scuba diving holidays as they offer a unique experience. The chance to scuba dive in an oceanic sink hole.

Experience sheer cliffs of coral descending into the depths, populated by rays, turtles and much more. They are located within easy reach of Darwin.

The Torres Strait is a collection of cays, islands, reefs and atolls between the tip of Australia and Papua New Guinea. Located in the far north of Queensland it is remote diving at its best, with many excellent but rarely visited sites. The top spots are only accessible by liveaboards that usually start at Lockhart River. The top wreck dive is the RMS Quetta, a passenger liner that sank in 1890.

Visibility at the inner reefs can be below 15m, but the strong currents provide rich waters filled with marine life. The channels near the outer reefs can have visibility way above 30m.

Here, where fishing is controlled, you will find huge fish including mantas and sharks. Yippee! The best time to dive the Torres Strait is between August and December, with water temperatures of 29 degrees year round.

Around the tip of the country, you’ll find yourself on the popular east coast. My next stop would definitely be Lizard Island. It is not just one of the best dive sites in Australia, but is frequently listed as one of the top spots in the world.

It’s also an ideal base to explore the northern part of the Great Barrier Reef. Cod Hole is a favorite dive spot in the splendid coral underworld. It provides the chance to cruise around with the stately potato cod, which can weigh in at upto 30 kg. 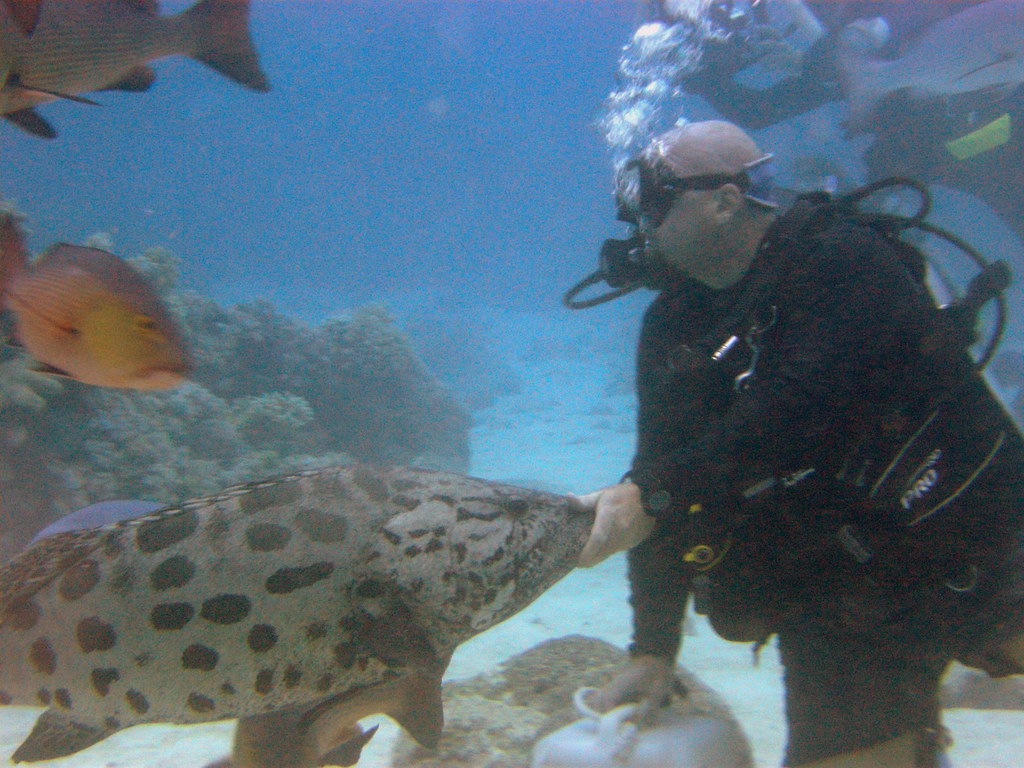 Much of these northern waters remain relatively untouched and in addition to the cod, you’re likely to see everything from manta rays, reef sharks, to giant 150-year-old clams. Plus of course plenty of reef fish.

Moving south the next stop is the stunning Port Douglas with its 4 mile beach. There are fabulous dive opportunities around the Agincourt Ribbon Reefs. These are made up of 19 dive sites including Barracuda, Harrys, Nursery and Turtle Bommie to name a few.

With its gardens of coral and massive clams, divers can encounter colourful flat worms and nudibranchs. If you prefer your marine life a little larger, then you’ll enjoy the dopey turtles, unique hump headed parrot fish, and a variety of larger fish such as reef sharks.

OK so it is only an hour further south but any guide to Australian scuba diving holidays has to include Cairns. It is a very popular stop on the backpacker circuit and love or hate the town there is plenty to see both in and out of the water.

Cairns is a popular gateway to the Great Barrier Reef, so is a good base for all kinds of scuba diving excursions. Whether you’re looking for day trips or liveaboards, it is a great access point to endless dive sites. 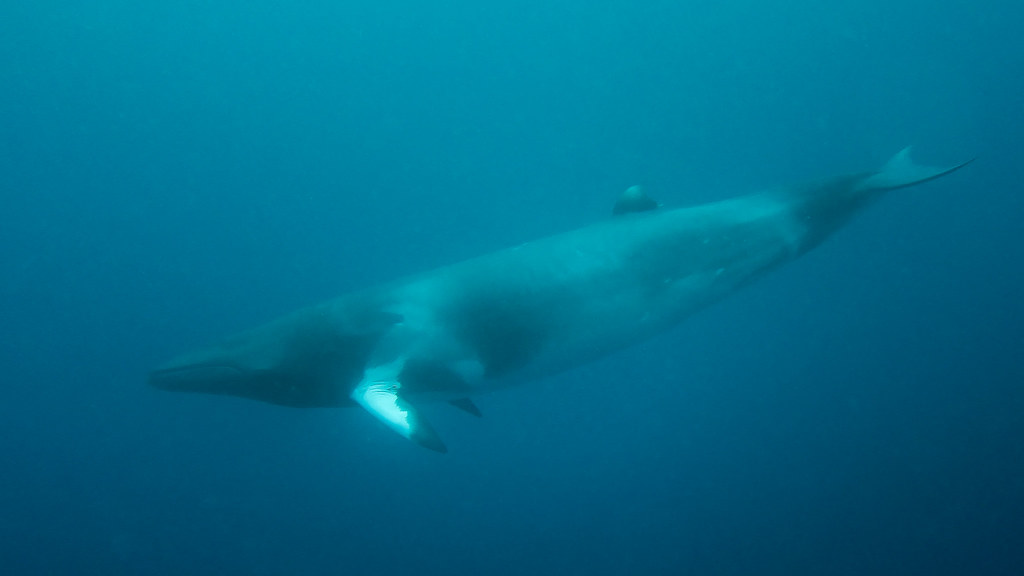 Look out for Norman, Hardy, Saxon, and Arlington reefs and Michaelmas and Upolu cays. All about 90 minutes off Cairns. To amplify an already amazing experience, in June and July you can swim with dwarf Minke whales. Underwater heaven.

Further off the coast, and for liveaboard divers only, is the Coral Sea. It is a 2000 km long bio region including the Great Barrier Reef but extending into the South Pacific all the way to Vanuatu.

Here, you can see sharks feeding at Predator’s Playground. Experience 1,000m drop-offs into the Abyss. Dive on reefs covering hundreds of square miles And see tropical species not found on the Great Barrier Reef.

The best sites feature spectacular walls, steep drop-offs and lone seamounts Some rising thousands of metres from the ocean floor to just below the surface.

Renowned as one of the best wreck dives worldwide, the SS Yongala is a diving nirvanah. It sank during a cyclone in 1911, and over a century later the 120m ship is budding with underwater life.

This enchanted shipwreck is listed as one of the top ten dive sites in the world due to the sheer variety of marine life. Schools of trevally, kingfish, barracuda, and batfish surround the wreckage.

You can see giant Queensland grouper that live under the bow. Lionfish hide under the stern, turtles graze on the hull, and hard and soft corals make their home on everything.

These 74 breathtaking islands offer countless dive sites both among the islands and on the Outer Great Barrier Reef. Most people visit on a dedicated dive liveaboard.

The blue, blue water is incredible and contrasts the sugar like white sand that graces the islands. Almost every anchorage on the islands has amazing fringing reefs and drop offs plus a huge variety of marine life.

A list of the best dive sites in Australia wouldn’t be complete without Heron Island. With 20+ glorious dive sites and mainly high end accommodation it is the perfect destination for Australian scuba diving holidays.

The island is a coral cay situated on the reef, so many of the sites are a short boat ride away. Most of the dives are 18m or less allowing up to 3 dives per day.

Notable sites include Coral Cascades and the Blue Pools, favored by octopus, turtles, and sharks. Plus the most famous spot Heron Bommie, with its rays, eels, and Spanish Dancers. Simply stunning. 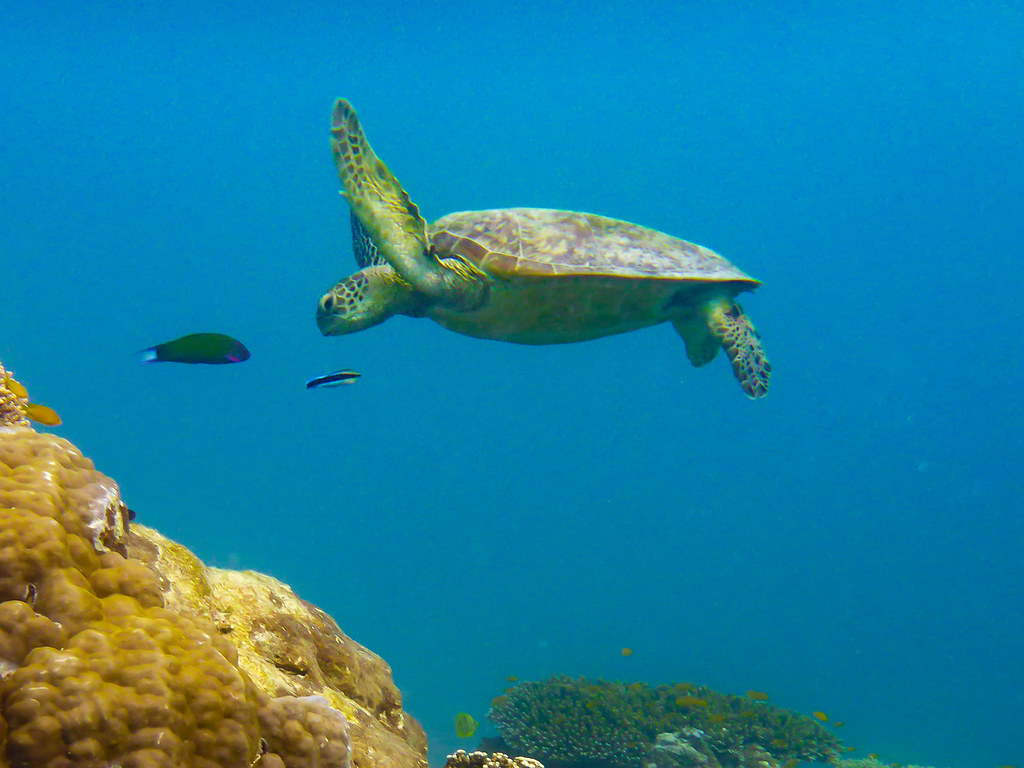 Another location of note in Queensland – last and by no means least – is Lady Elliot Island, a coral cay island off the town of Bundaberg. One word – mantas!

It is known as one of the best fish dives in Australia with over 670 species having been spotted. You are likely to see dolphins, sharks, and turtles on most dives.

Around a two hour flight east of Sydney you’ll find Lord Howe Island. With over 60 documented dive sites in the area it could keep you entertained for a lifetime. There is the chance to see Ballina Angelfish that are normally only found in waters around 100m deep.

There is a huge variety of marine life, rare corals and epic coral formations all in crystal clear waters. Five major ocean currents meet here including the EAC (the warm East Australian Current) from the Great Barrier Reef into the Tasman Sea. 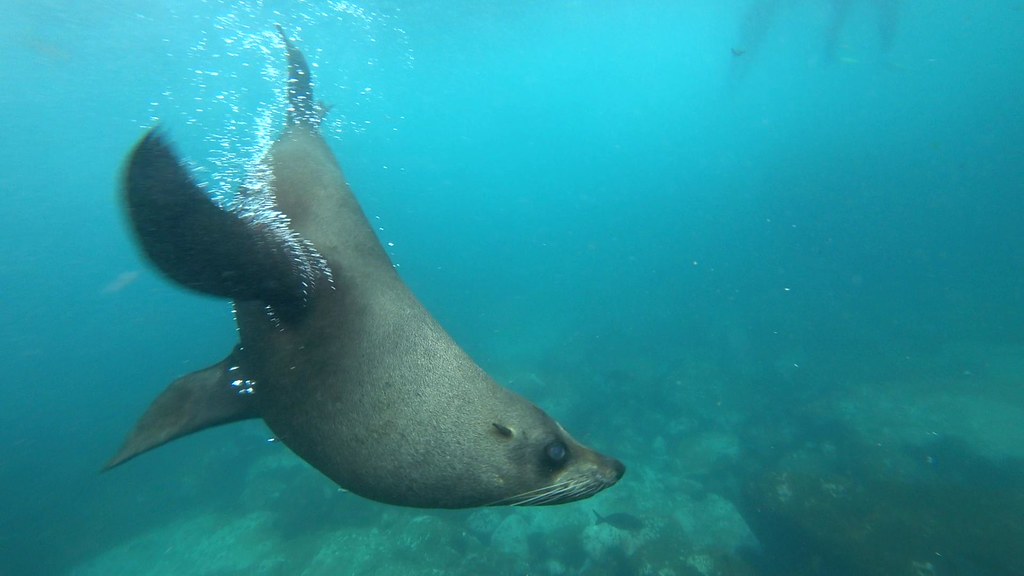 There are not many places that you can dive with fur seals but Montague Island is a sanctuary for them. At the right time of year you can also share the water with penguins and whales.

Although the water is a lot colder than the north of Queensland there is still plenty to see beneath the waves in Tasmania. There are around 20 dive sites reached from Bicheno, with Paradise Reef, Golden Bommies, and Magic Garden among the most popular.

It offers some of the best dive sites in Australia for temperate water diving. Visibility is less than the tropical waters, but lots of plankton means plenty of marine life.

In Port Phillip Bay you’ll find over 50 shipwrecks including four WWI submarines, and a 136 metre (446 foot) missile destroyer. Also it is well worth diving from Portsea Pier where you can see weedy seadragrons and seahorses.

There is diving right from the beach in Glenelg with nudibranchs, crabs, and sea stars often seen around the jetty. But head out to Glenelg Dredge and Glenelg Barge wrecks for a deeper dive. The Glenelg tyre reef which was set up in 1983 as a fish breeding ground is also worth a visit.

Port Lincoln is one of the best dive sites in Australia as it is the only place you can cage dive with Great White Sharks. Whether you agree or disagree with the activity it is one of the best shark diving spots on the planet. So well worth including in this guide to Australian scuba diving.

The next stop is in the top left of the country in Western Australia and the Indian Ocean. Ningaloo Reef, near the beautiful town of Broome, is a World Heritage Site for outstanding natural beauty and marine life.

Ningaloo is Australia’s second great reef and runs for over 150 miles. It’s the stuff scuba dreams are made of. Coral as soon as you leave shore, manta rays, sharks, turtles, dolphins, dugongs and about 400 species of fish.

Not forgetting from March to June it’s in a migration path for humpback whales. Plus it is one of the best whale shark diving destinations worldwide. Easily one of the best dive sites in Australia – I’ve never wanted to be a mermaid more.

Located 300km off the coast you’ll need to join a liveaboard from Broome to reach Rowley Shoals. They are a remote group of three ring-shaped coral atolls on the edge of the continental shelf. 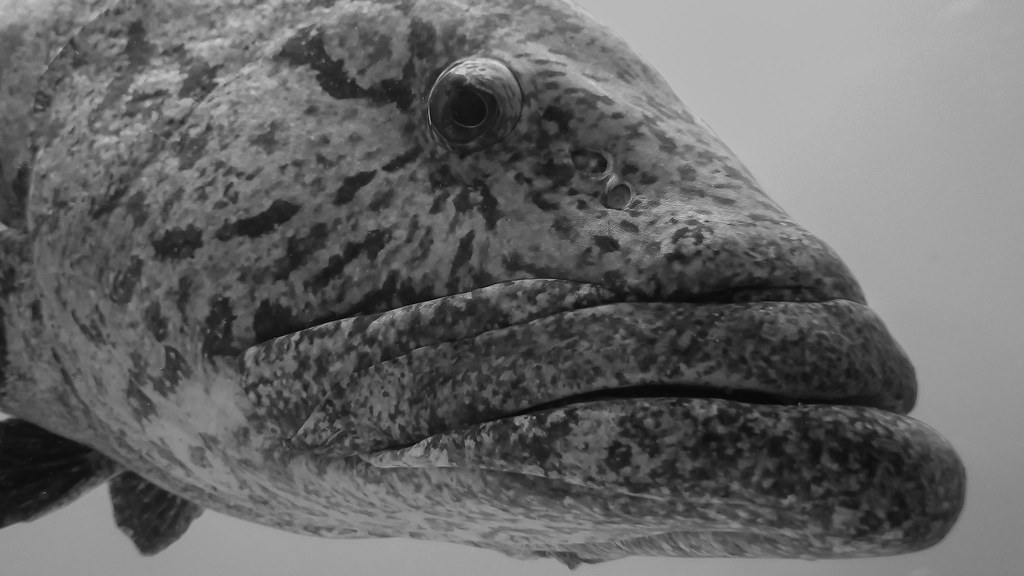 It is one of the most pristine marine environments in the world and visitors are limited. The dive season only runs from September to December, so there is not much time to dive with the 200 species of coral and 700 species of fish.

OK so not exactly in Australia but…. Christmas Island is an Australian External Territory located over 1500 km from the west coast. It has some of the best dive sites in Australia. 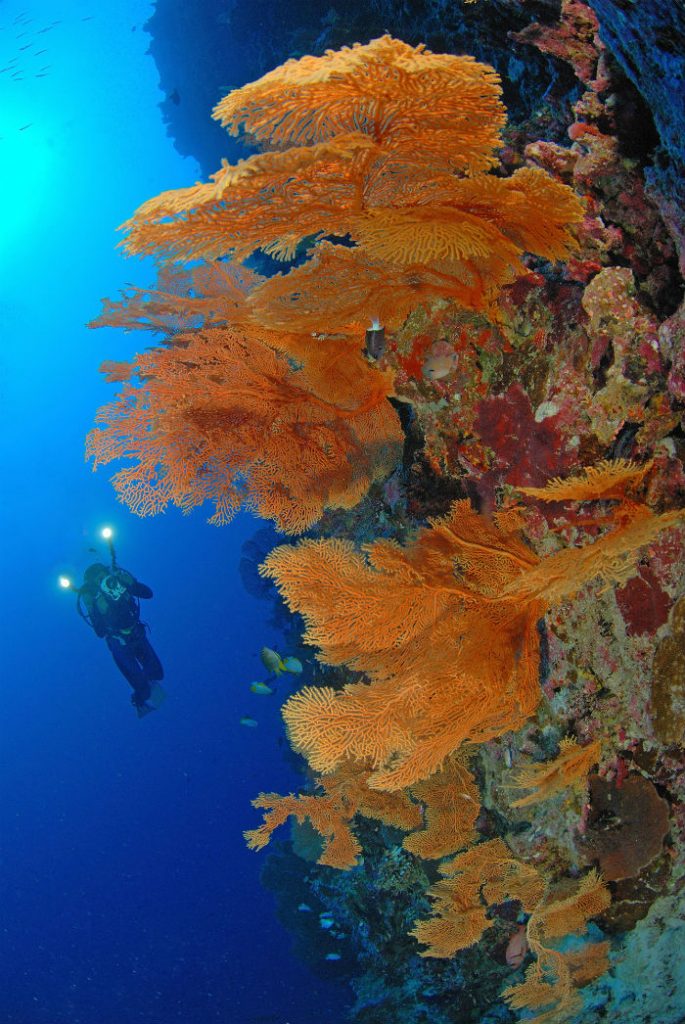 The island is surrounded by coral reefs, and perched near the rim of the Java Trench (Indian Ocean’s deepest point). So you can dive one of the deepest drop-offs in the world just a short distance from shore.

There are over 60 dive sites offering stunning diversity with dives to suit all abilities. There are many dramatic walls with large, healthy fans, plus cave dives and a WWII wreck. 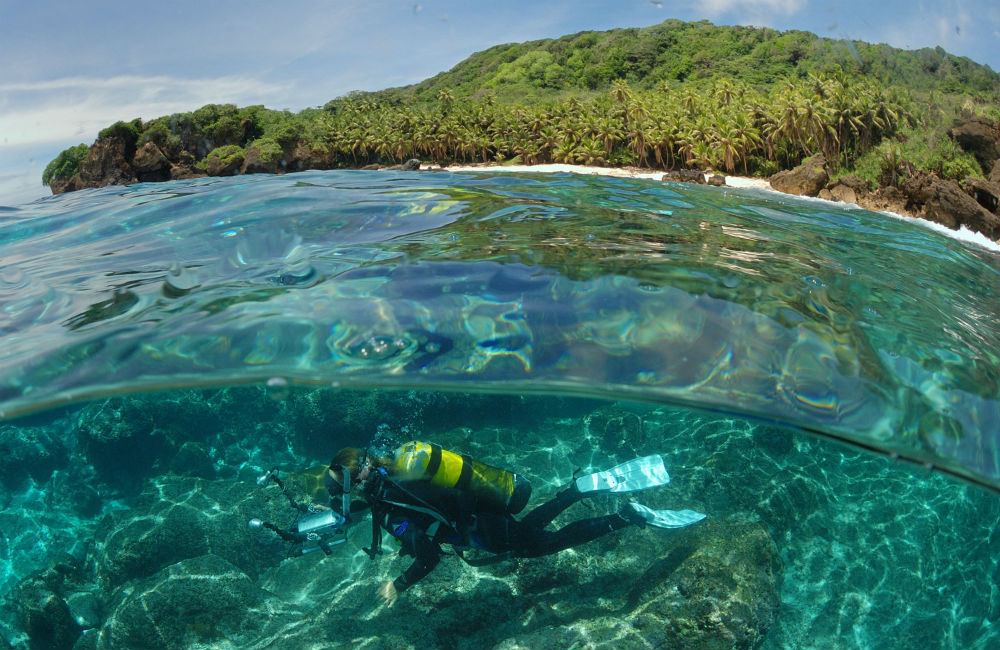 You could spend the rest of your life diving around Australia. Seriously, you’d need to grow gills. And this is just a taster of what Australian scuba diving holidays offer!

We are a proud supporter and Brand Ambassador for Mozaik UW Cameras and www.housingcamera.com